We were delighted to welcome back Dame Rosemary Squire OBE, to represent the world of theatre with a keynote talk at a languages event, appropriately entitled ‘All the World’s Your Stage’. 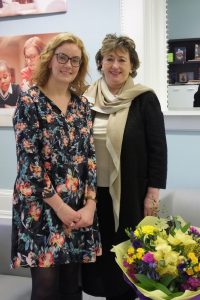 Dame Rosemary is an alumna of the school and was also instrumental in the development of our £9M performing arts centre which bears her family name – The Squire Performing Arts Centre, also known as ‘the space’. As a language graduate herself, Dame Rosemary was the obvious choice of keynote speaker for this event, organised by the BLC (Business Language Champions Ltd), combining her wealth of theatrical business expertise with her experience in the study of languages. Welcoming her back to the school also gave Julie Keller an opportunity to congratulate her on her recent Damehood in the New Year’s Honours list. Julie said: “It’s such a privilege to welcome Rosemary back to the school and acknowledge her incredible success. She is such a great role model for our girls. We’re delighted and grateful to her for attending this event and we couldn’t be more pleased about her well-deserved recognition in the New Year’s Honours list.” She receives the honour from Her Majesty The Queen for services to Theatre and Philanthropy.

In her keynote talk, Dame Rosemary Squire told girls about the importance of having dreams and ambitions, and to always do what they love, stressing that girls and young women should not be afraid of learning skills in business. She used the story of her own success as an example, and also told the girls of how she loved languages at school and how studying languages opened up a world of culture and travel. 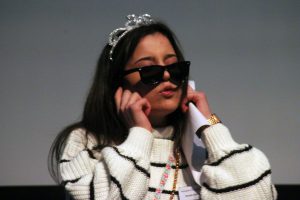 The event was a drama-based regional challenge for A-Level language students organised by Business Language Champions Ltd, an East Midlands based company working with schools and businesses to promote the use of language skills in the workplace. There were participants from NGHS joined by girls from Oakham School and Stamford School who took part in workshops on writing and performing in order to produce short plays in their chosen language on a particular theme, which they then performed in front of the other groups for judging. 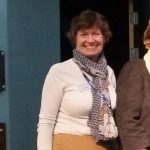 Sally Fagan from BLC said: “We were delighted to be invited by NGHS to use The Space for a drama based language event. As this was a pilot event, we weren’t sure what to expect, but we were amazed at what the students managed to produce in such a short time. We were truly impressed with the results and do hope to repeat this event again.” 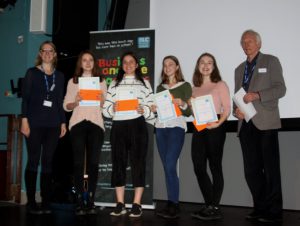 The day was a great success and enjoyed by all those involved, and there were some wonderful performances showing a great grasp of languages and some very witty scripts. The girls all did really well including the eventual winners who were ‘Comédie Française’ – a team composed of two students from Stamford, one from Oakham and one from NGHS. All the teams were mixed school and were given names from famous theatres. The winning team wrote and performed a short comedy about a single mum with two children trying to get to the airport for a flight with everything going wrong.

Languages are a popular subject choice here and we value their importance and the opportunities which can result from their attainment. This event was a successful way of building confidence through performance and the Modern Languages Department were very pleased with the whole outcome, and especially excited to have such a special guest of honour in attendance.