Football at Nottingham Girls’ High School is going from strength to strength and the young Year 7 and 8 team are enjoying competition at local and national level, including securing third place at the Independent Schools’ Football Association U13 National Finals at St George’s Park on Tuesday 26 June.

The nation is currently gripped by football fever, and Nottingham Girls’ High School is no exception with our girls and staff enjoying the international spectacle of the World Cup. We’re proud of our sporting successes and bucking the trend of male dominated sport, and the football progress is of particular pride to Mr Cooper who has been coaching the team since they began in the Junior School where he teaches Year 5. Mr Cooper said: 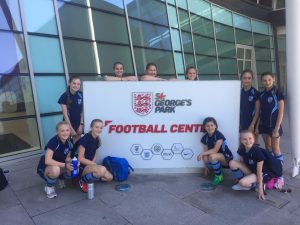 “It’s been a wonderful journey to where we are today. This team started with no footballing experience but with the backing of Miss Keller – the School Head and a big Nottingham Forest fan – we have built a strong team, going from local city tournaments to representing the county at regionals. To get through to the national finals of such a competitive and prestigious tournament, and at a facility such as St. George’s Park, has been a tremendous achievement and an experience the girls will never forget.” 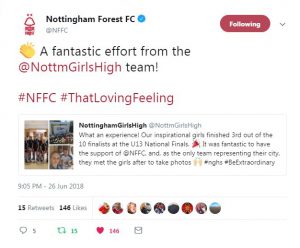 Reaching the finals of the ISFA U13 competition, and being the only team representing the city and the Midlands, earned the respect and support of none other than Nottingham Forest Football Club, with which the school works closely; the club even tweeted their appreciation and players approached the school team for photo opportunities at the end of the contest.

The girls had an amazing day and were proud to have scored the only goal conceded by eventual winners, Surbiton High School. Goal scorer Issy and friend Alice said: “It was an incredible day and a lot of fun. The standard of play was really high and we’re really pleased with how we’ve grown as a team since last year.”

We regularly achieve success in all major track and field events, and offer fantastic opportunities with regular overseas trips, including a forthcoming football trip to Barcelona. An increasing interest in, and uptake of football is a great boost, and we recently hosted Olympian and England international footballer, Sophie Bradley-Auckland, as guest speaker at our Sports Awards Evening; an inspiration and great role model.

With much in the news recently about child health and exercise, and how more boys than girls take part in sporting activities outside school, NGHS is delighted to be turning the tables. Girls at the school clearly love their sport and are encouraged to take part in activities at club, local and even international level where successes have been achieved in competitions ranging from rowing to cheerleading.

Our Head, Julie Keller, commented: “I’m so proud of all of our girls and grateful to the staff and parents for their involvement and encouragement. Their sporting successes are amazing, and I’m really thrilled with their performance at this recent football event at St George’s Park. It’s great to see so many girls involved and obviously loving every minute of it, and having the support of local giants Nottingham Forest is brilliant. We’re proud to be a school at the heart of the Nottingham community and we look forward to further sporting success next year.”