Normally there’s only one 2 o’clock in my day, and just for clarification, it’s pm, but on Friday 15 February my first 2 o’clock was am instead and that was quite a shock to the system! However, it marked the beginning of a sensational seven days in New York City – a trip organised by the NGHS Drama Department.

Despite not being a Drama student by any stretch of the imagination, I thought the trip was incredible and the fact that it involved aspects of many other subjects including Art, English and History made it beneficial to everyone – Drama student or not.

We stayed at the Courtyard by Marriott hotel and walked an average of around 10km a day from there with all our routes and tube adventures navigated by the one and only Mrs Lake, so we saw a considerable amount of Manhattan and definitely hit all of the famous landmarks. 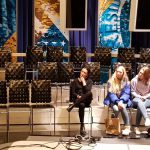 There were countless unforgettable moments made in NYC and for me, the main highlights were the CNN visit which we were extremely lucky to get. Led by the lovely NGHS alumna Alexandra King, many of the girls found this particularly interesting, including myself due to my interest in journalism. The street art tour was incredible, it showcased the work of numerous artists such as Invader, and many of the photos from the tour have featured in my GCSE Art coursework. And of course, seeing the Broadway show ‘Mean Girls’ after taking part in a Broadway rehearsal workshop led by one of the dancers in the show just hours before curtain was amazing, as was visiting the infamous Lee Strasberg workshop the previous day. The show was spectacular, there’s really no other word for it and it’s safe to say I finally see how Broadway got its reputation.

We also visited well-known restaurants such as the Ellen Stardust Diner and Bubba Gump (being a huge fan of Forrest Gump I was really looking forward to this), as well as the Empire State Building and the Rockefeller Centre, both of which had breathtaking views of the city. 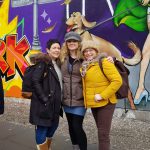 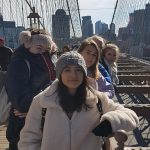 Anything organised by the fabulous three members of staff who, I’d like to say “accompanied” us, but the notoriously busy streets definitely turned it into more of  a ‘follow the leader(s)’ situation, didn’t disappoint. As a group we are extremely grateful for all the effort put in by Mrs Lake, Miss Oakley and Brenda – I can’t imagine it was easy but hopefully they enjoyed it just as much as we did.