We’ve been a two-dog school for nearly a couple of years now so we thought we’d reflect on how our four legged friends have settled in, and how our girls (and staff) have benefitted, and continue to benefit from, their presence at school. 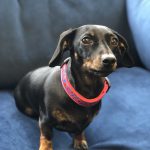 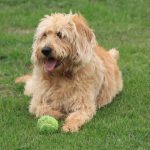 We did our homework before embarking (if you’ll pardon the pun) on this venture, having studied the research on the positive impact that having a school dog could bring, from providing a calming effect on anxious pupils or those with autistic tendencies, to aiding motivation and learning in pupils who are sometimes not engaged; the list goes on. Several of our sister GDST schools already have dogs and highly recommended the idea to us. Both of our dogs belong to members of staff and live at home with them, but spend their days at school. This works really well – how many other dogs enjoy company and adoration all day long? 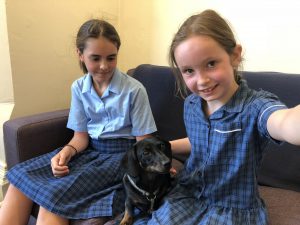 The impact of Delilah at the Junior School was immediately noticeable with girls eager to meet her and spend time with her. They were taught all about her, where she came from and how to behave around her, so that she could be easily and safely incorporated into school life. Of course, all of this was strictly monitored and supervised. Not everybody loves dogs, and no girl has to come into contact with Delilah if they don’t want to – parents were consulted about this before Delilah arrived. She has hugely influenced teaching at the Junior School, fitting nicely into their ‘RECIPE for Success’, especially the ‘empathy’ element of the mantra ‘resilience, empathy, creativity, initiative, positivity and excellence’. Delilah often visits classrooms and helps bring lessons to life. Also, girls often get to accompany the Head on a walk with her as a form of ‘reward’ for something they may have achieved or done particularly well. She’s been a big hit, bringing calm and excitement in equal measure, when and wherever needed. 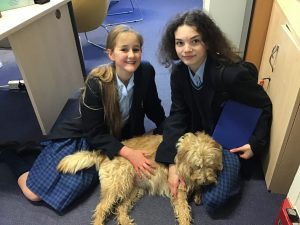 Saffy was introduced to the Senior School in a similar way, and the girls instantly fell in love with her. She resides mostly, in the Admissions Office, where the girls can see her as they go about their journeys to and from lessons. She is now so well behaved that there is no need for the baby gate we once had on the door – she stays put or comes when she’s called. Saffy also attends lessons and is even a bookable resource, with girls signing up to take her out during break and lunchtime, or free periods. She has played an important role during exam time, often seen being petted and bringing calm to a queue of nervous girls as they wait to sit their exams. Staff also book her out, often with interesting results, such as one of her visits to the library about which our assistant librarian said:

“Rachel and I booked Saffy for a reading session with a small group of reluctant readers in Year 3 – she attempted to eat the books!”

Of course we do not condone such behaviour, but it did bring a smile! Saffy is regularly walked by the girls in the morning before registration and this has proved to be a great start to the school day for some, such as one girl who said:

“Saffy is really relaxing and walking her every morning really helps me to not get so anxious about Y11 work and exams. She also never fails to make me smile no matter how bad my day has been.”

Staff also take Saffy out if they get an opportunity and their timetable allows, and she is a regular and popular visitor at Pet Club where Mrs Hurst said:

“The girls at Pet Club love it when Saffy attends. They are able to learn how to care for dogs, and the responsibilities that come with this. They also enjoy teaching her new tricks. It is wonderful to see the happiness that the girls emit when they play with her.”

Both dogs also get involved in open events where possible, taking their ‘meet & greet’ duties seriously. It’s wonderful to see faces light up when girls are welcomed to taster days by a happy, four-legged friend and a wagging tail. They break the ice and vanquish boundaries, they love company and generally bring joy.

We would say that on the whole, the presence of both dogs has been a hugely successful and positive move. Girls across the whole school have embraced them and made them part of school life. They have learned about care and responsibility, and those who have their own pet dogs at home have really enjoyed having a communal pet at school too. They are a great incentive, and bring girls together and get them to spend time outdoors and be more active and engaged than they may otherwise be during their breaks. Both dogs are adorable, great fun and beneficial assets to the school community – we wouldn’t be without them.