Our girls have triumphed on A-Level results day following significant changes over the last two years. Today they celebrated A-level success across a wide range of subjects, particularly those related to STEM, and we’re very proud of them indeed.

This is the first year of results since the changes to the examination system. Students are now tested at the end of the two years rather than in modules – a system that historically has not favoured girls, but we could not be happier and Miss Keller is delighted.

With an incredible 100% pass rate of which 92% of grades are C and above, and more at A* than in the last three years, Miss Keller said: “With improved results in Biology, Physics, Further Maths, French, RS and English Literature, this fantastic all-girls school is proving its worth.”

STEM subject achievements are notable with higher grade success rates, including 50% of our Physics results at A*, 61% of our Biology grades at A* or A, and 100% of results in Further Maths at A* or A (of which 67% are A*).

This means that many girls are able to go forward into their chosen STEM subjects at university, with over 10% studying Medicine, including Amirah Latief who was delighted with her three A*s and will go on to Leeds.

Congratulations are due to all of the girls, some of whom have been at the school since Reception. Sadia Zaman and Maria Wood are both STEM champions who achieved A* and A grades across their subject areas. Sadia will now study Medicine at Leeds and Maria will study Physics at Imperial College, London. Phoebe Andrew, who joined us in Year 12, is to be commended on achieving four A*s and goes on to study Engineering Design at Bristol. Phoebe has enjoyed STEM success and outdoor activities in the Sixth Form, including taking part in a Gold D of E expedition during which she infamously had to be rescued after she became stuck in boggy moors at Whernside. In true NGHS style,

Phoebe went on to raise money for the Cave Rescue Organisation by running a half marathon.

Olivia Utting, also new to the school, having joined in Year 8 is another great success story having achieved three A*s. Olivia will go on to study Food Science and Nutrition at Leeds.

Head Girl, Jenny Raw, has had an amazing year having travelled to the United Nations in New York representing the National Council of Women Great Britain (NCWGB) at the United Nations Commission of the Status of Women 61 (CSW61). Jenny achieved two A* grades and an A and will be taking a gap year during which she hopes to continue blogging for the Huffington Post along with fellow student Rachel Wibberley. Both will pursue their ties with the National Council of Women. Jenny has also been offered an internship with the British Red Cross which she will begin in September.

We provide support across ALL levels and subject areas and an extensive mentoring programme. We feel this has played a key role at the school and is something of which we very proud. Every girl on our ‘Gifted and Talented’ register has achieved A* and A grades, and all of the girls taking part in the A* mentoring programme achieved all A* and A grades in subjects ranging from Art, Classical Civilisation, Combined English, DT Product Design, EPQ, Further Maths, German, Latin and RS all achieving 100% A* to B.

These wonderful results come at the end of Julie Keller’s first full year as Head and she is incredibly proud of all of the girls and the level and diversity of their achievements, saying: “Every one of our students is a star! I am so proud of all of them. Our results prove conclusively that we have risen to the challenges of the new A-level system and both staff and students are thrilled,” adding, “In my first full year as Head, I wanted to ensure that all girls, whatever their dreams, ability and aspirations, achieved their goals. With so many more girls than last year achieving the highest grades, I’m confident my vision is on its way to fruition. Well done girls, I’m proud of you.”

You can see more of our lovely pictures in our gallery here: 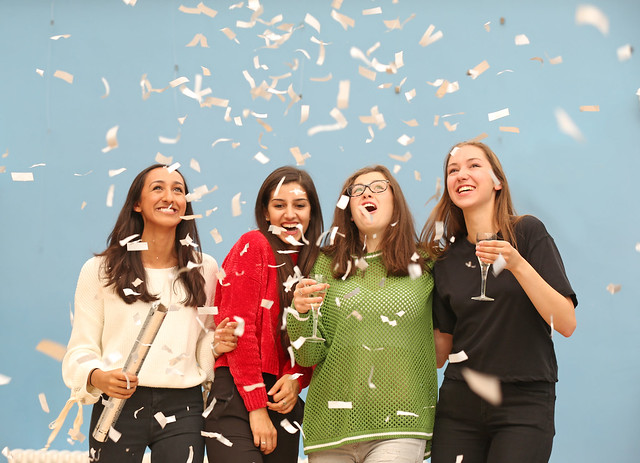