We were delighted to open our school archives to our NGHS community on Wednesday 12 December. It was a great event and a wonderful opportunity for alumnae, former and current staff, girls and parents to look through our archives dating back to 1875. 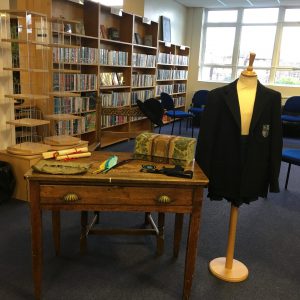 The archives are extremely varied and we were able to display a collection of photographs, newspaper cuttings and admissions records.  There was also a selection of blueprints of buildings and even Miss Winifred Philipps’ desk and chair from when she was Headmistress.

Our librarian and archivist, Mrs Rachel Whitty, opened the event with a short welcome and spoke about some of the interesting archives we were able to showcase. 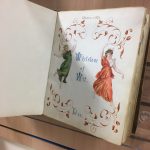 On display was a collection of original material from Whetstone of Wit. This was an entirely pupil led school magazine which started in 1878, and we are lucky enough to still have the original manuscripts which include some incredible hand painted drawings, essays and poems written by the girls.

We were also able to display our earliest school prospectus dating from the 1920s.  Of particular interest was the fact that lessons were only held from 9am to 1pm, with the afternoon dedicated to Art and Music.  We also liked the fact that a medical note was required for those girls wishing to take part in physical activity!

From more recent times, we were able to show a selection of local newspaper clippings from the 1960s.  These detailed the controversy caused when a number of Upper Sixth Form girls attended a rape trial in the local courts.  On arriving and discovering the nature of the case, the girls decided that they wished to stay and observe proceedings.  This decision proved a controversial one and sparked much debate in the local press over the following days.

The items on show during the evening were just a small selection from our extensive archive and it is hoped that further events may be possible in the future.

It was lovely to welcome so many alumnae back to the school who used the event not only as an opportunity to reminisce about their school days, but also to catch up with friends.