On Thursday 23 March we had the most fantastic evening as our £9m performing arts centre ‘the space’ was officially opened by Rosemary Squire OBE, after whom the centre is named.

This event was one we had been looking forward to for a long time as this project finally came to fruition after ten years in the planning and building stage. The centre is a totally amazing space which can adapt to several different seating styles and floor plans through the use of floor lifts and top-end technology, so that it can seat hundreds of people or smaller audiences, and cater for any kind of performance event, be it musical or spoken word.

The initial funding came from the GDST with the remaining £1.5m being raised by the school through a series of fundraising events organised by the ‘Raise the Curtain’ campaign chaired by Rosemary Squire who is currently founder and joint CEO of theatre company Trafalgar Entertainment, and also a former pupil at the school.

Other donations were made by various trusts and patrons, including Nottingham philanthropist Sir Harry Djanogly, school alumnae, parents, students and friends of the school. Their generosity has been acknowledged by naming rooms in ‘the space’ after them, including the main auditorium named after Lady Carol Djanogly (wife of Sir Harry Djanogly) and a studio named after Jenny Farr MBE – an alumna and former governor of the school. Generous support from The Garfield Weston Foundation is recognised with the naming of the 74 seat studio theatre. Individual and group donations have also been acknowledged through gold, silver and bronze leaves on an art installation, the Donor Tree, which takes pride of place at the entrance to the centre.

As well as being used for the teaching and learning of music and drama at school, and for school productions, the centre will also be available for use by community groups, arts organisations, other schools and businesses, beyond school hours. It has been purposefully designed to widen access to the arts and for developing community led projects. Nottingham’s schools and vibrant local dance, music and theatre groups will now have access to high-quality, affordable space for teaching, rehearsal and performance.

The building was designed by Nottingham architectural practice Marsh:Grochowski and was built by Balfour Beatty –  it has an orchestra pit and control rooms with professional technical equipment, and a tension wire grid above the auditorium allowing safe access to lighting rigs and industry standard equipment, enabling students to learn the professional skills of the theatre technician.

The opening event was a huge success during which invited guests had a chance to see ‘the space’ for themselves, and enjoy a phenomenal production of Grease by our wonderfully talented girls. The show was extraordinary and a surely a sign of things to come at this fantastic new facility. 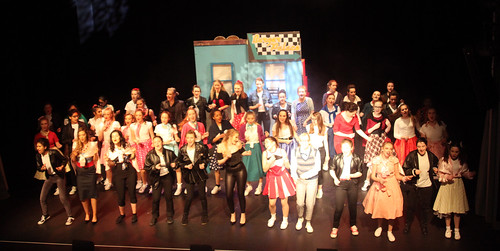