Six girls joined NGHS alumna, Emma Brown, to take part in possibly the most poignant school excursion ever as they represented NGHS at Armistice Centenary events across France and Belgium, and we could not be more proud of them. 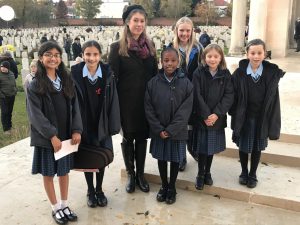 The six winners of the Junior School ‘Armistice 100’ competition (Nitya, Priya, Olivia, Maisy, Amelia and Evie) had the huge honour and privilege of travelling to France and Belgium with teachers Mr Cox and Mrs Braud to tour the battlefields and to pay their respects on behalf of the school community.

For ones so young, the girls were a total credit to the school, showing maturity beyond their years and gaining the recognition and admiration of everybody they met. They joined NGHS alumna and acclaimed mezzo-soprano singer, Emma Brown, as she sang at the various sites, and some of the girls had the opportunity to perform too, singing, playing the violin and reciting poetry. 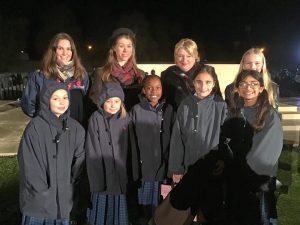 The tour began with the girls laying a wreath during the Last Post Ceremony at the Menin Gate in Ypres, Belgium, on 9 November, where Emma had sung at the ninetieth anniversary of the unveiling of the Menin Gate last year. They were also invited to participate in the bilingual opening ceremony of “La Grande Veillée,” the Great Vigil, in the Faubourg d’Amiens cemetery in Arras, France, where they met Victoria Wallace (pictured here with Emma and the girls), Director General of the Commonwealth War Graves Commission. She said to them:

“In the twenty-first century, when you’re a girl, you don’t have to be the queen or the prime minister, you can also be director general of the Commonwealth War Graves Commission.”

Perhaps the most moving and memorable part of their journey was at the Thiepval Memorial monument near Picardy in France. At this, the largest monument in the world to missing British and Commonwealth soldiers who fell in the Battle of the Somme, the girls took part in a ceremony organised by the Royal British Legion, Somme Branch. Captain Terry Twining of the Adjutant General’s Corps kindly invited the girls to participate before the religious ceremony;

Evie and Olivia had the honour of being invited to be the first members of the public to lay a wreath:

Maisy and Nitya read their own poems, Priya played her violin, and Amelia sang “Amazing Grace,” before an audience of over 1,000 people. What an absolutely incredible achievement for these girls, who executed their roles with confidence and poise despite the poor weather, and even caught the attention of The Times newspaper which featured their story and claimed:

“The most beautiful, haunting, moment of the ceremony of remembrance at Thiepval on the Somme came when Amelia Stephenson, a nine-year-old pupil at Nottingham Girls’ High School, sang Amazing Grace on the steps of Sir Edwin Lutyens’s magnificent memorial.”

At Tyne Cot, the largest British and Commonwealth cemetery in Belgium, the local municipality arranges an annual ceremony on British Remembrance Day. There were over 1,000 people present in the enormous cemetery, which has 12,000 graves and commemorates over 35,000 missing. Unfortunately, there were no microphones here so it was not possible for Nitya and Maisy to read their poems or for Amelia to sing. However, Priya’s violin carried beautifully as she played Pachelbel’s cannon, with Emma being a human music-stand. Emma sang with the West Yorkshire Police Band during the wreath-laying, after which they all marched together with the band, two generations of NGHS hand in hand.

The last ceremony was at the Tank Memorial in Poelkapelle, Belgium at which the girls participated in a soil scatter. The soil had been taken from CWGC cemeteries with fallen tank corps, from Bovington – the home of the Tank Corps, and combined with dust from the Portland Stone used to make CWGC headstones. Together with the VIP party, the girls scattered the soil in the newly created Garden of Remembrance, and read poetry and performed music before the ceremony. 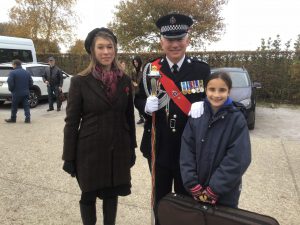 Needless to say, the school is immensely proud of this group of girls and everything they have done, and grateful also to alumna Emma Brown who said:

“I was delighted to join the girls on their remembrance journey in France and Belgium. They made a big impression on the organisations: not just their poetry and their music, but their deportment and eloquence. It was so lovely to meet them and to reconnect with school, and I’m really looking forward to visiting next year and singing during the concert on 16 June.”

Emma will be joining our Vocalise choir and John Keys, Nottingham City Organist, in a concert at Nottingham’s Albert Hall during which some of the Armistice pieces will be performed along with lots of other items.

Our amazing girls are back now, and reflecting on their incredible experience. Their path to this opportunity began in April to September as they took part in the ‘Armistice 100’ competition devised at the Junior School. The girls, of ages ranging from eight to eleven, had to submit portfolios of evidence demonstrating three of the NGHS Junior School’s core values – Resilience, Positivity and Empathy.  Their deeds and accomplishments were wide and varied, and included charitable fundraising, sports and fitness, community work, helping out with home chores, acts of kindness, researching WW1 and composing poetry with the themes of war and peace.

After much difficult deliberation, eight runners up were chosen, and six winners. Each of these girls then had the honour and privilege of taking part in British and Commonwealth Remembrance events at home and abroad, after initially taking part in the beautiful Festival of Remembrance concert at school.

The eight runners up went along with Mrs Fowler to the National Memorial Arboretum in Staffordshire on 5 November to pay their respects and to admire the many significant tributes, and the six winners took part in the trip mentioned above.

This whole sequence of events around the Armistice Centenary culminating in the overseas trip will certainly stay with us for a very long time, and the girls should be very proud as they are now part of history and something incredibly special.