Not only is Shamima a great role model for women in STEM, she has also spent many years working towards equality and diversity.

She trained in Medicine at Oxford University, and in Paediatric Metabolic Medicine at Great Ormond Street Hospital, London.  She also established the Mitochondrial Research Group at ICH in 2000, with a particular focus on discovery of the molecular basis of mitochondrial disease. Her research group has discovered several nuclear genes responsible for mitochondrial disease and is currently working on developing novel therapies for these currently incurable disorders.

Professor Rahman is an Editor of the Journal of Inherited Metabolic Disease, a Senior Editor of the Annals of Human Genetics and until recently was an Officer of the Society for the Study of Inborn Errors of Metabolism’s Education and Training Advisory Committee. She sits on the Scientific Advisory Boards of the French Muscular Dystrophy Association (AFM-Telethon), the Lily Foundation and the Freya Foundation.

From 2012 – 2017 Shamima was chair of the Equality, Diversity and Inclusion Steering Group at ICH, leading ICH to two silver awards from the Athena SWAN Charter and putting into place good practices which eventually led ICH to being awarded a gold Athena SWAN award in 2020. Shamima was nominated to and is a member of the Black Female Professors Forum.

After qualifying as doctors, my parents worked in a remote region of far northern Nigeria, close to the Sahara Desert, where I was born in 1964. Post-colonial Nigeria was a place of Emir’s horse races, extreme heat and dangerous wildlife. When my mother discovered a green mamba close to my cot, local superstition demanded that after the snake was killed, its head had to be chopped into a hundred pieces (or was it a thousand?), each buried separately so that it would not be able to regenerate (at least that’s the story my mother told me). When I was a few months old, my parents moved to London so that my father could train in tropical medicine at the London School of Hygiene and Tropical Medicine in Bloomsbury. Subsequently, I moved a lot as a child as my parents were Junior doctors and worked in six month contracts. I attended 10 different primary schools and as a result became quite shy and found public speaking a huge challenge – last year I spoke at a conference in Rotterdam to more than 3000 delegates, which I hope is evidence that we can rise above our challenges.

By the time I arrived at NGHS, my Dad was a consultant physician and later became the medical director of his hospital. My mother was a tremendous role model, having attended medical school with only a handful of other women in the 1950s, and eventually became a consultant anaesthetist. She made me believe that I could be anything I wanted to be, for which I will forever be grateful. My parents both had brilliant minds, and I sometimes wonder what careers they might have followed had they not chosen to emigrate to Britain, where unfortunately institutionalised racism undoubtedly impeded their career progression.

I joined NGHS in their Centenary Year, 1975, which was a year of endless celebrations including a visit from the Duke of Edinburgh, and left in 1982. My intake was the first year after direct grants were stopped, but I was lucky enough to be awarded a full scholarship (or free place as it was known in those days). I was the only Muslim girl in my year. There were Jewish girls in the year group but no Muslims. As such I found Religious Education uncomfortable and stopped going to assembly, where the focus was entirely on Christian issues. I don’t know if that is still the case today but I hope not, as that made me feel “other” and excluded on a daily basis. There was not a lot of ethnic diversity and I don’t recall there being any Black pupils at school at the time. I so enjoyed seeing the diversity amongst the NGHS pupils when I returned to visit the school recently. Diversity is great for people’s creativity, understanding of the world and leads to a richer and more fulfilling society. Commuting to school made for a long day and meant I couldn’t participate in any after school activities. I traveled by bus so my day was from 7:15am – 5:15pm. In the days before video recorders and the iPlayer, this meant that I suffered the social ignominy of only being able to watch Blue Peter in the school holidays! 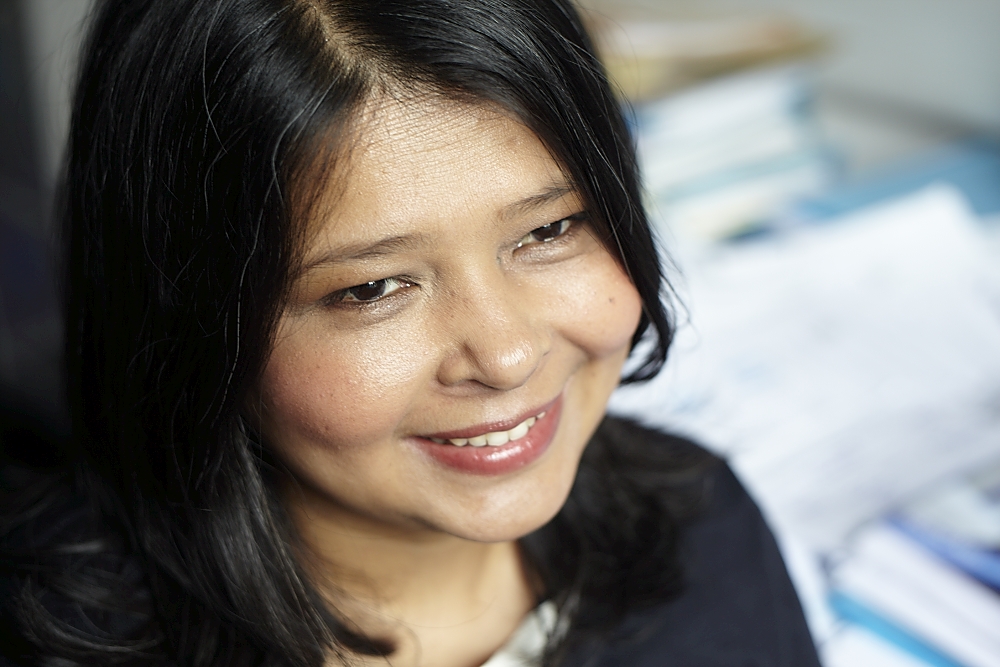 I believe that single-sex education gives girls more of a chance to get ahead and do what they want to do. Miss Lewenz (the Headmistress during my time there) was really inspirational. I suppose that in the 1970s perhaps the world wasn’t such a fair place. Boys’ schools attracted better teachers and therefore achieved better results, but I was ambitious and my mother influenced me and encouraged me to become a doctor. The School supported me in this and provided lessons to prepare for Oxbridge.  I was also taught practical and helpful life skills such as mind mapping and speed reading. I particularly remember some key teachers including Mrs Percival (English), Mrs Winfield (German), Dr Sanders (Chemistry), Mrs Kerr (Latin) and Mrs Fisher (Physics). I remember that school was lots of fun (especially as there were quite a few pranksters in my class!) and that we were made to feel that the world was our oyster.

After NGHS I went on to Oxford University which taught me even more about how to think critically and communicate my ideas verbally in small group tutorials and in writing. During my undergraduate degree, I worked in a laboratory in the Haemophilia centre, which gave me an introduction into the world of research.  At that time, I was desperate to be a hands-on doctor and went straight on to the Oxford clinical medical school rather than pursuing PhD studies. I qualified as a doctor in 1988 and as a house officer worked for 120 hours a week, including alternate nights on call, for a basic salary of £9,000.

After house jobs I trained in Paediatrics, first at the Royal Hospital for Sick Children in Bristol and then at Great Ormond Street Hospital in London. While working at Great Ormond Street I was awarded the Royal Children’s Hospital Research Foundation Scholarship at the Murdoch Institute in Melbourne, Australia, which allowed me to spend a year in Melbourne and gain further experience in research. On returning to England I completed my paediatric training at the John Radcliffe Hospital, Oxford and then took up a Medical Research Council Clinical Training Fellowship at the Institute of Child Health, London where I worked on my PhD entitled “The Molecular Basis of Cytochrome c Oxidase Deficiency in Childhood” before establishing the Mitochondrial Research Group. One of my proudest moments was when I was promoted to Professor in 2014.

As a non-white woman, I would say that women have a very important voice and our voice is starting to be heard. Personally, I feel that ethnicity has been more of a barrier to me professionally than gender. This is why I’ve worked hard to support Diversity and Inclusion in my work. Trying to have those conversations can often be challenging and uncomfortable but people are finally starting to open up and that is great progress. There is still a lot of inequality, though, and a pay gap that needs to be addressed. But my concluding thought has to be this one: “To do anything you have to first believe in yourself.”